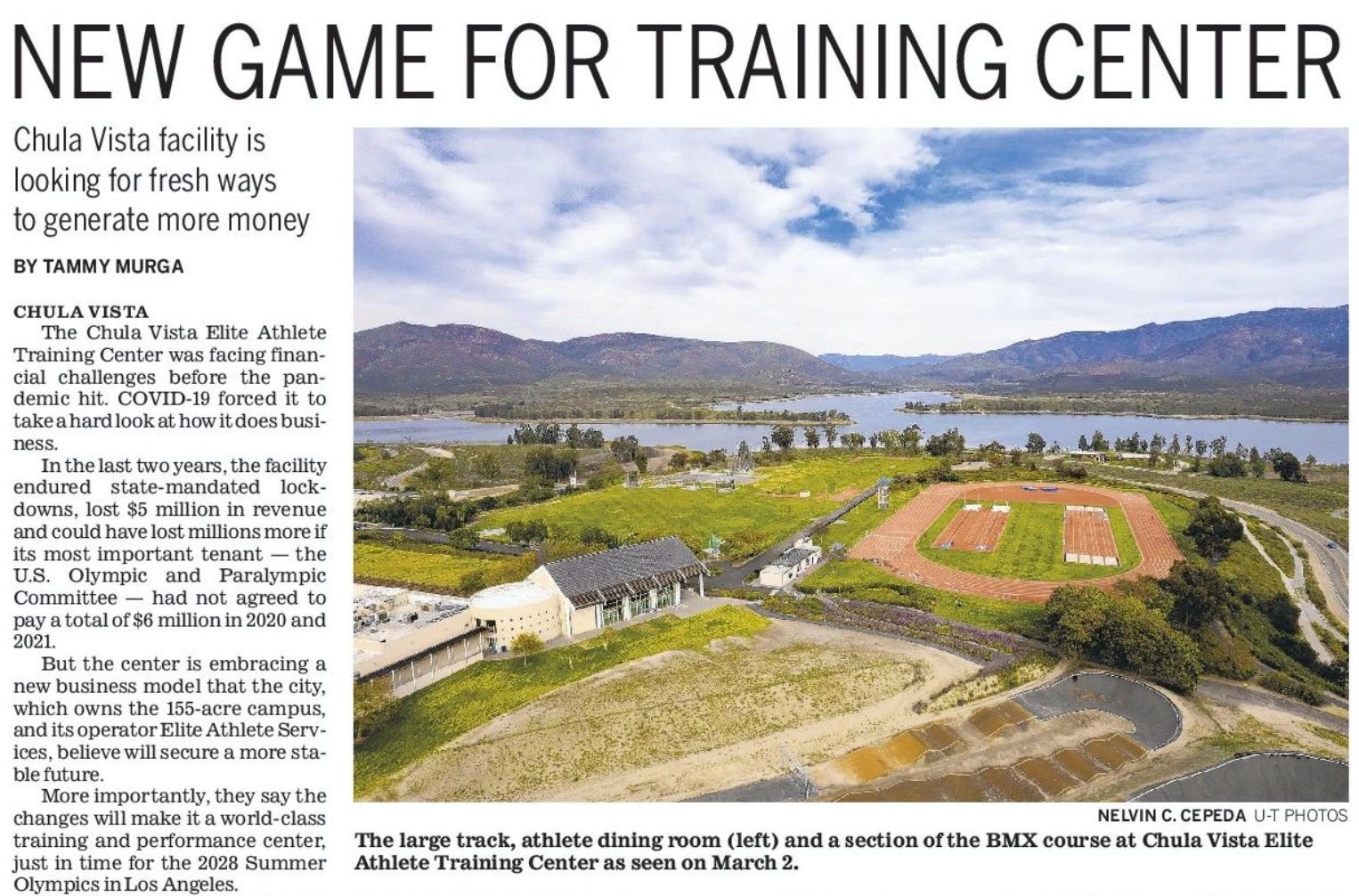 The Chula Vista Elite Athlete Training Center was facing financial challenges before the pandemic hit. COVID-19 forced it to take a hard look at how it does business.

In the last two years, the facility endured state-mandated lockdowns, lost $5 million in revenue and could have lost millions more if its most important tenant — the U.S. Olympic and Paralympic Committee — had not agreed to pay a total of $6 million in 2020 and 2021.

But the center is embracing a new business model that the city, which owns the 155-acre campus, and its operator Elite Athlete Services, believe will secure a more stable future.

More importantly, they say the changes will make it a world-class training and performance center, just in time for the 2028 Summer Olympics in Los Angeles.

“With the world’s eyes focused on L.A. in 2028, I believe that we are uniquely qualified to play the most important role of any training center on Earth,” said Brian Melekian, Elite’s president. “And I don’t think that’s hyperbole, because we’re geographically close and we have a facility that nobody else in this world has.”

The campus has opened its doors to many U.S. teams including archery, rugby, soccer, track and field and paralympic track and field, as well as teams from other countries such as Canada, India and Qatar. In the Tokyo Olympics held last year, 93 medals were won by athletes who trained at the Chula Vista campus.

The goal, Elite officials said, is to have 100 gold medals come out of the facility — 50 from Team USA and another 50 from other countries — in the 2028 Olympics.

“Given that we’re 150 miles away from the opening ceremony at SoFi Stadium, we think the demand for training, for residents, for dining at this facility will be such that we’re going to be busting at the seams and have a hard time accommodating everybody,” Melekian said.

To prepare for that demand, Elite is looking to renovate some of its dormitories, add more beds, more fields, more dining space and an indoor event venue. There’s also an idea to create wearable, sports performance technology to track athletes’ sleep, training and other logistics. Elite officials estimate needing to raise about $50 million to create the facility they envision.

That’s where the new business model comes in.

“We operate as a nonprofit but it doesn’t mean that we can’t be profitable,” Melekiannsaid. “What we’re doing now is really trying to treat this like a business.”

Under Melekian’s leadership, Elite is looking to generate revenue from non-sports-related sources rather than relying heavily on the Olympics and Paralympics Committee. On-site training has comprised 95 percent of the center’s revenue, but by 2022, training is anticipated to make up 75 percent as corporate events and sponsorships play a larger role, city officials said.

One of the most recent and challenging changes dealt with the contract between the city and the Olympics and Paralympic Committee, which formerly owned the campus. Since 2017, when the committee handed over the site to the city, the committee agreed to $3 million minimum annual payments to Chula Vista toward beds and services for its athletes through 2020.

“It was a bit of a blow to us to have them say, ‘We’re going to stop the automatic payments because we don’t like this model. It makes it difficult for us to be in the middle,’” said Chula Vista Deputy City Manager Kelley Bacon. “But it also makes it a little difficult for our operator because now they’re dealing with all the different, national governing bodies of sport.”

Rick Adams, the committee’s chief of sports performance, said in an emailed statement Thursday the contract reflects “an operating model more consistent with other third-party owned training facilities. Support for the Olympic and Paralympic community at CVEATC remains high, and we look forward to continuing this partnership on behalf of Team USA as we plan and prepare for Los Angeles 2028.”

The drop in commitments won’t necessarily equate to less revenue, Bacon said, because of Elite’s preparation to attract new clientsand non-sports businesses, as well as rent out clinics to the committee, which they previously owned. The agency is also welcoming the public for community events and fundraisers such as 5k runs, high school homecomings and Fourth of July fireworks.

Currently, it costs about $8 million a year to run the facility and it has made about $9 million in revenues. Melekian envisions that high demand for the center will result in revenue of up to $15 million annually by 2027.