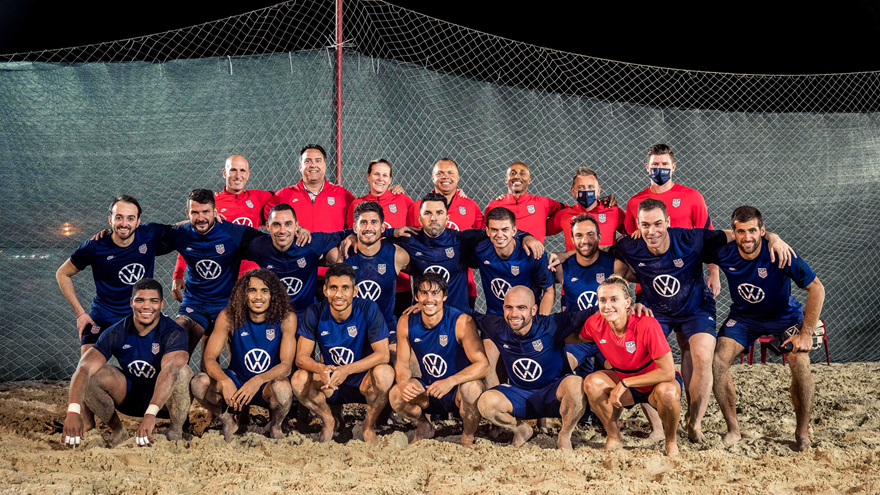 Chula Vista, CA – The U.S. Men’s Beach Soccer National Team (USMBSNT) will hold a four-day long training camp at the Chula Vista Elite Athlete Training Center (CVEATC) from March 31 – April 3. During their time at the CVEATC, the USMBSNT will be training on our beach volleyball courts, gym, dining and staying overnight. This is the first time the USMBSNT will be training at the CVEATC, and we are excited to have them here.

The sport of beach soccer is believed to have been started by European sailors along the coastal regions of Brazil at the end of the 19th century. It was there that the first official beach soccer tournaments were held in 1957. Fast-forward to 1993, when an international competition was held in Miami, Florida, attracting thousands of in person fans and tv viewers. Two years later in 1995, the first unofficial Beach Soccer World Cup was played and the European Pro Beach Soccer League was established. Shortly after, the game was being played in France, England, Spain, Germany, Belgium, Malaysia and Argentina. Finally in 2005, FIFA incorporated beach soccer into the football family and held the inaugural World Cup on the beach of Copacabana, Rio de Janeiro, Brazil (won by France). Today, more than 200 countries from around the world play the sport, with over 30 top-class international events held annually, featuring both national teams and clubs played by men and women.

To learn more about the USMBNT roster at the CVEATC, please follow the link below:

To learn more about training or groups events, visit our website at trainatchulavista.com.