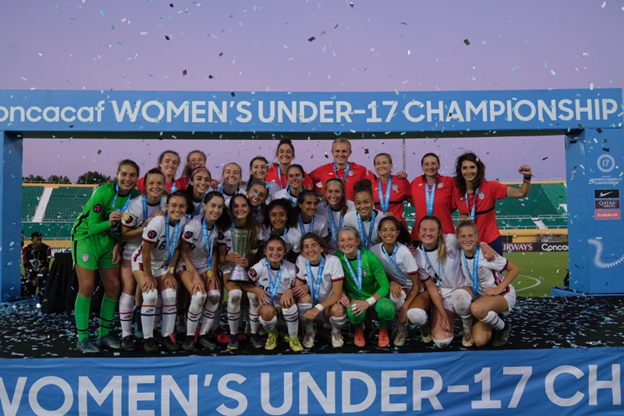 Chula Vista, CA – The U.S. U-17 Women’s Youth National Team won the 2022 CONCACAF U-17 Women’s Championship, defeating Mexico 2-1 in Santo Domingo, Dominican Republic. This is the Young Americans third straight CONCACAF Women’s U-17 title and record fifth overall. With the victory, the Young Americans clinched a spot in October’s FIFA U-17 Women’s World Cup, which will be played in India. The U.S. U-17 WYNT are frequent visitors to the Chula Vista Elite Athlete Training Center (CVEATC), last being in November of 2021 for Head Coach Natalia Astrain’s first training camp in charge. The CVEATC is proud to be a facility U.S. Soccer can count on and would like to congratulate the Young Americans on their historic win.

The 2022 CONCACAF U-17 Women’s Championship represented the first set of international matches for this age group since the start of the Covid-19 Pandemic. The biennial tournament qualifies three teams into the U-17 FIFA Women’s World Cup from North America, Central America, and the Caribbean regions. The Young Americans began the tournament in group G along with Grenada, Puerto Rico, and Costa Rica. The team steamrolled their way through group stage play, defeating Grenada 20-0, Puerto Rico 13-0, and Costa Rica 5-0. The 38 goals scored over the three matches of group play were the most ever for a U.S. team in CONCACAF Women’s World Cup qualifying history.

Next up for the U-17 WYNT was a round of 16 math-up versus Curacao in San Cristobal, Dominican Republic. Once again, the Americans shut out their opposition, winning the match 11-0, with six different players finding the back of the net. The Young Americans maneuvered their way through the knockout stage with ease, defeating Jamaica (4-0) and Canada (3-0) in the quarters and semis respectively. With a combined score of 18-0 through the knockout stage, the U.S. U-17 WYNT arrived at its seventh and final game of the tournament, a championship match versus archrival Mexico. The U.S. went on to defeat Mexico 2-1 in a thrilling final. With the win, the U.S. concluded the tournament with a perfect 7-0-0 record while scoring 58 goals and conceding only one, tying Mexico for the most goals scored in the competition’s history.

Once again, the Chula Vista Elite Athlete Training Center would like to congratulate the U.S. U-17 WYNT on being 2022 CONCACAF Champions and would like to wish them the best of luck as they continue their preparations for the 2022 FIFA U-17 Women’s World Cup in India.

To learn more about the U.S. U-17 Women’s Youth National Team, please follow the links below:

The Chula Vista Elite Athlete Training Center is set on 155 acres on south San Diego County, home to over 20 sports and a diversity of teams and athletes across Olympic, Paralympic, professional, collegiate and international countries. To learn more about training or groups events, trainatchulavista.com.