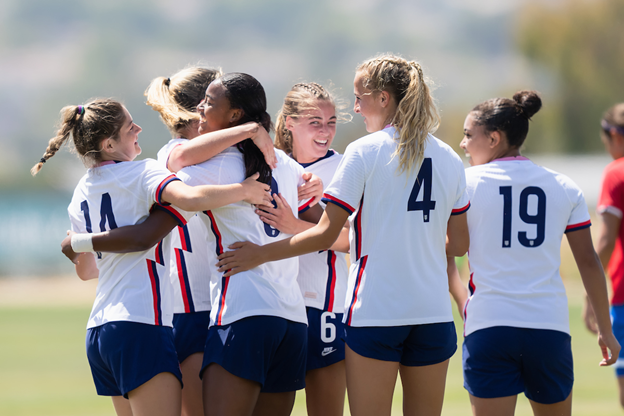 Chula Vista, CA – The U.S. Under-20 Women’s Youth National Team will face Costa Rica in two friendly matches at the Chula Vista Elite Athlete Training Center (CVEATC) during the month of May. Aside from playing two friendly matches, the two teams will be training, dining, and staying overnight during their time at the CVEATC. Head Coach Tracey Kevins called up 23 players for this training camp, with only one player having previous U.S. U-20 experience (Sally Menti). The two teams are currently preparing for the 2022 FIFA Under-20 Women’s World Cup, which will be played in Costa Rica from August 10-28. The CVEATC is excited to welcome back the U.S. U-20 WYNT to campus and would like to welcome the Costa Rica U-20 Women’s Youth National Team for the very first time.

The first match was played on May 15 with The USA defeating Costa Rica 3-0. Throughout the game, The USA dominated possession against a physical and hardworking Costa Rica side and should have scored a few more times, had it not been for The “Las Ticas” goalkeeper Carolina Mendez Argueds’ 10 saves. The first goal came towards the end of the first half with a poacher finish by forward Camryn Lancaster. The USA went on to double its lead in the 72nd minute when Forward Taylor Huff played a through ball to second half substitute Katherine Radar, who didn’t think twice and buried the ball into the lower left corner. The game was sealed in the 82nd minute with an excellent half volley finish by Taylor Huff to make it 3-0. This was a vital game for The USA as 22 of the 23 players earned their first caps at the U-20 level, giving them much needed experience before the World Cup.

The final match at the CVEATC was played on May 18 as The USA once again shutout Costa Rica 5-0. This time around The USA wasted no time getting on the scoresheet with a goal from Katherine Rader in the 3rd minute. Just Five minute later, Rader once again was in the middle of things, this time drawing a penalty which was taken by U-20 veteran Sally Menti who sent the keeper the wrong way to make it 2-0. Midfielder Jaedyn Shaw showed everyone her class in the 40th minute with the best goal of the training camp, lofting a curling shot from 25 yards out into the top right corner to make it 3-0. Jillian Shimkin went on to make it 4-0 in the 76th minute with an inside the box blast into the top left corner, as The Las Ticas goalkeeper was only able to get a hand on it. Katheryn Rader made it 5-0 with two minutes left in the game, finishing a layoff from forward Camryn Lancaster which sealed the game for The USA.

The goal of this U.S. Soccer training camp at the CVEATC was to expand the U-20 Women’s player pool before the World Cup in August, and head coach Tracey Kevins did just that. Aside from 22 players receiving their first U.S. U-20 call-ups, five players received their first international experience at any level (Avani Brandt, Riley Tiernan, Jameese Joseph, Taylor Huff and Camryn Lancaster). The U.S. U-20 WYNT is set to kick off the U-20 Women’s World Cup on August 11 versus Ghana in Group D, alongside reigning world champion Japan and the Netherlands. The CVEATC would like to wish the U.S. U-20 WYNT and the Costa Rica U-20 WYNT the best of luck as they continue their preparations for the 2022 FIFA U-20 World Cup in Costa Rica.

To learn more about the U-20 U.S. WYNT, please click on the link below:

The Chula Vista Elite Athlete Training Center is designated as a U.S. Olympic and Paralympic Training Site. It opened in 1995 as an Olympic Training Center and was the first to be planned specifically as such. Housing, dining, training facilities, local transportation, recreational facilities, athlete services and professional development programs are all on-site in support of the athletes training here. Visit trainatchulavista.com today for more information.