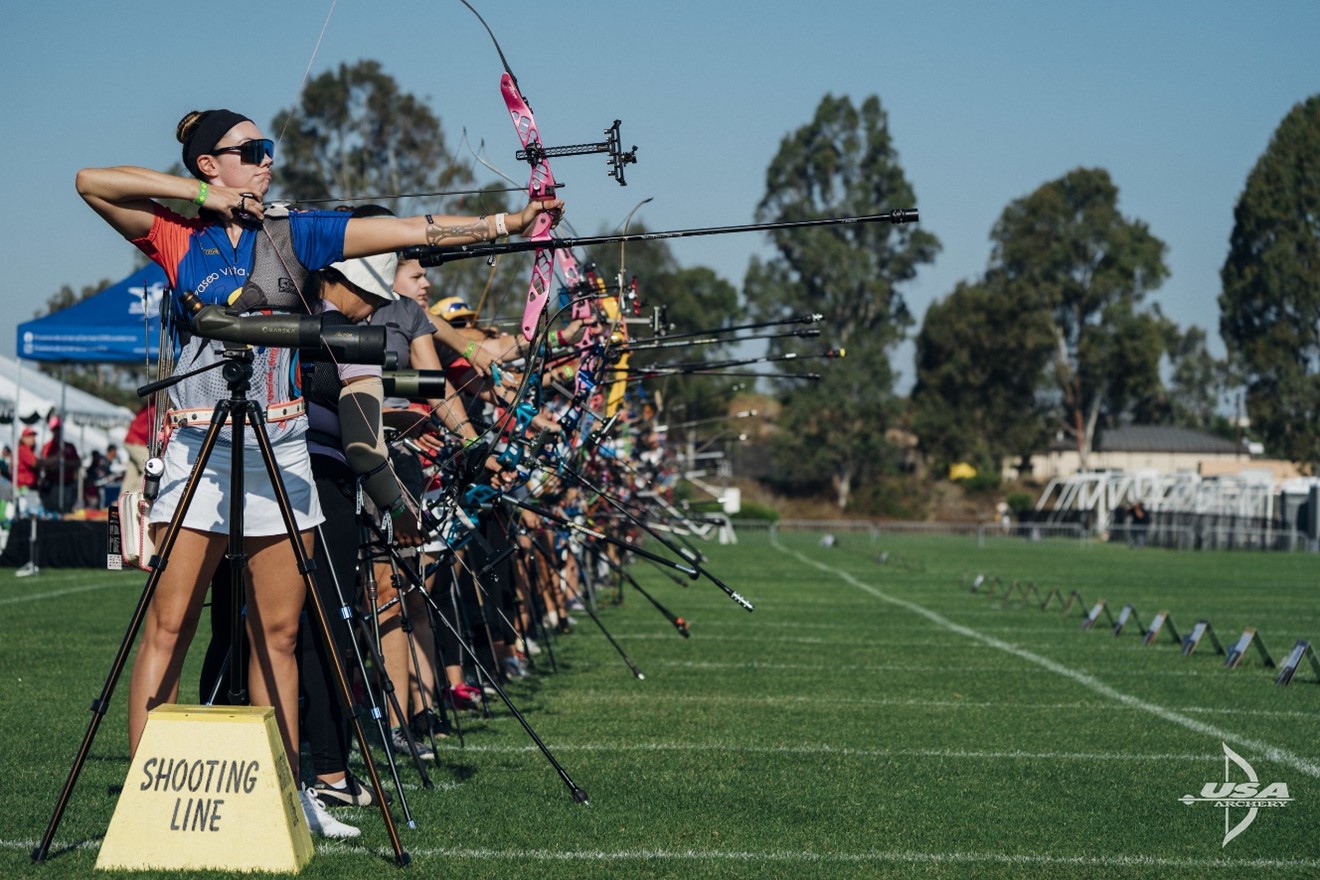 Chula Vista, CA – The Chula Vista Elite Athlete Training Center (CVEATC) hosted the largest SoCal Showdown in history with over 640 archers out on the fields this past weekend. The Easton Foundations SoCal Showdown marks the third of four stops on the U.S. Archery Team Qualifier Series Event tour, the last being Florida’s Gator Cup this past May. Archers of all ages in four different age categories (U-18, U-21, seniors, masters) and three different brackets (recurve, compound, barebow) gathered at the CVEATC for an intense weekend full of competition.

With perfect weather conditions to begin the weekend, the qualification rounds saw record breaking scores, however, that did not last for long as tricky tricky winds decided to make an appearance for the elimination rounds on Saturday and Sunday. After winning gold at the Gator Cup last month, Jordan Meiners did it once again, taking home the gold in the women’s U-21 recurve bracket, edging out Brianna Laux (silver) and Natalie Hong (bronze). On the men’s side, Oscar Martinez took home the gold in a nail bitter over Cameron Senay and Nathaniel Aud who had to settle for bronze. On the women’s U-18 recurve bracket, Samantha Ensign won her second gold of the season defeating Maya Miller and Laurel Anderson.

Ensign shared, “I’m happy with how I handled the wind; I kind of shocked myself with that! It helped having my team from Lancaster archery here; they’re great supporters. It came down to being able to take my mind away from shooting and just focus on one arrow at a time.”

Moving on to the senior bracket of the tournament, Brady Ellison defeated CVEATC resident athlete Jack Williams in the men’s recurve competition, with Matt Requa rounding out the podium. On the women’s side, Casey Kaufhold made it to her third finals appearance of the season, defeating Rebekah Brown in the process. Kaufhold had this to say about her victory, “I just took it one shot at a time and tried to adjust as best as I could. There were a couple shots I could have made better choices on where to aim off but by the end I figured it out and ended on a strong note so overall, I’m happy. It was awesome shooting with Rebekah in the finals, she shot very well and hopefully we’ll see her in more medal matches.”

The men’s senior compound bracket saw SoCal Showdown defending champion James Lutz win once again over Tate Morgan who had to settle for silver. On the women’s side, Paige Pearce steamrolled her way to another gold. Meanwhile, there were no surprises in the senior barebow brackets, as top seeds Marcus Cooley and Nolan Encarnacion on the men’s side and Christina Lyons and Sara Gebhardt on the women’s side came away with the gold medals.

The Chula Vista Elite Athlete Training Center was delighted to host yet another Easton Archery SoCal Showdown, and is looking forward to doing it again next year.

Complete results of the 2022 Socal Showdown can be found on betweenends.com

To learn more about The Easton Foundations SoCal Showdown at the CVEATC please click on the links below: