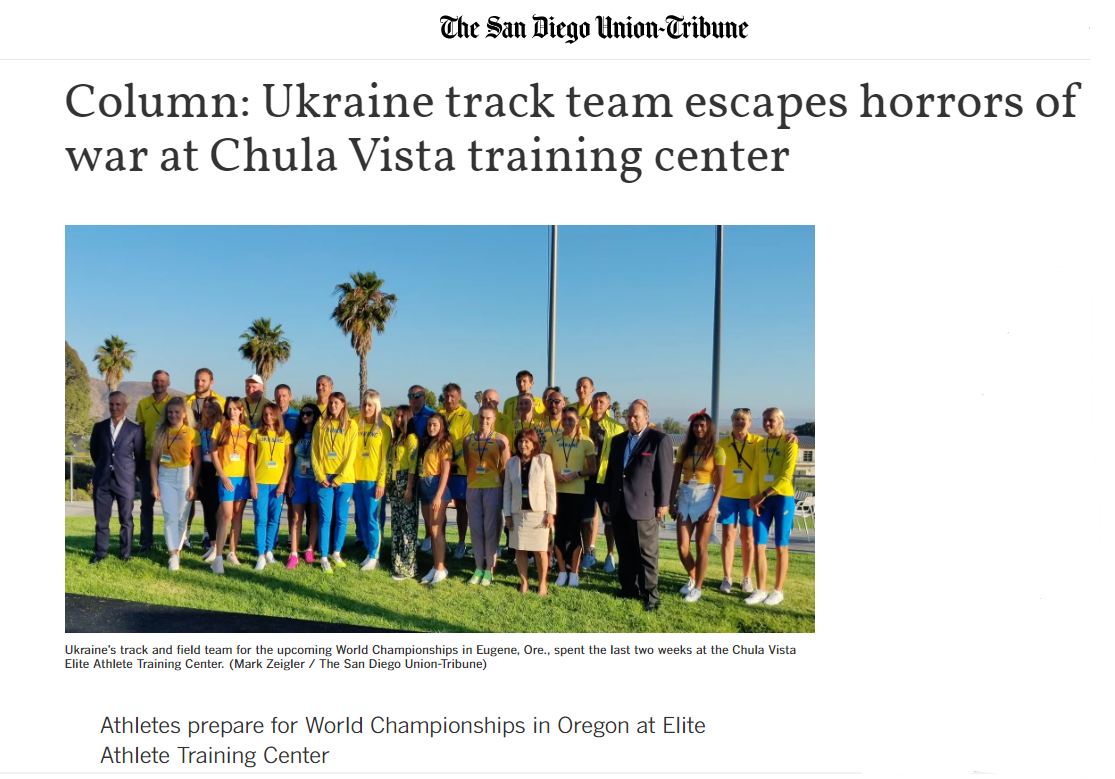 CHULA VISTA — Viktor Bryzhin and Olga Vladykina won Olympic track gold medals for the Soviet Union at the 1988 Summer Games in Seoul, South Korea. Bryzhin was on the 4×100-meter relay team. Vladykina won the individual 400 meters and got the baton in the anchor leg of the 4×400 at roughly the same time as American legend Florence Griffith-Joyner, then pulled away from her with one of the fastest relay legs ever recorded (47.7 seconds) to help set a new world record.

They were from what was then called Voroshilovgrad, a city of 400,000 named for a Soviet military commander. After the wall fell and the Soviet Union dissolved, it reverted to its original name of Luhansk in the far east of Ukraine along the Russian border.

They got married and had two daughters who also run track. Like all kids in the region, Anastasiia Bryzhina and her older sister grew up speaking Russian before learning Ukrainian and English in high school. But Anastasiia, without a shadow of a doubt, wants to make her allegiances clear.

“Even then, I never felt I was part of Russia,” Bryzhina, a quarter-miler, said on a balmy evening last week at the Chula Vista Elite Athletic Training Center, where Ukraine’s track and field team has been based ahead of the upcoming World Athletics Championships that open Friday in Eugene, Ore. “I’m really proud I’m from that region. Some of the Russian cities and people think that it’s part of Russia because it’s near the border. But it’s the first thing that I need to prove, that I’m an athlete from that region and I’m representing Ukraine, and nobody can say anything different.

“The second thing I want to prove is that Ukrainian people are strong and can compete, and can fight.”

You could hear the anger in her voice, see the sorrow in her eyes, sense the resentment and resilience in her mannerisms.

All the Ukrainian athletes and coaches have harrowing stories from the Russian invasion that begin in March and has steadily moved east. War does not discriminate.

World Athletics, the sport’s international governing body, launched a Ukraine Fund in April to aid athletes training for the world championships in Eugene and the under-20 championships in Colombia next month. It has distributed more than $200,000, first relocating them to training camps across Europe and then to Chula Vista two weeks ago. The U.S. Olympic and Paralympic Committee chipped in, as did the CVEATC.

The serenity of the training center, with its sun-splashed facilities overlooking a tranquil reservoir, seem a world away from the charred buildings of Mariupol and Kharkiv. But the air raid sirens, the scramble into underground bomb shelters, the tanks rumbling through the streets, the frayed nerves, the palpable fear are never far away with modern technology.

Oleksii Serdiuchenko, the team’s lead coach, wakes up every morning before dawn to account for the 10-hour time difference and phone his mother stuck in Sumy, another city abutting the Russian border.

“It’s not occupied,” Serdiuchenko said, “but every day there are bomb attacks.”

Athletes take a break from workouts, grab their phones and start scrolling news feeds. They’ll see photos of a building in their hometown that is now pile of rubble or get word of another city under Russian occupation or, worse, of another death. Or they’ll hear nothing because of power cuts or downed wifi towers.

“It’s really hard mentally,” 400-meter hurdler Anna Ryzhkova said, “because 24 hours per day I’m worried about my family, about my friends, who are in Ukraine now and might not be safe. Every minute, there’s a chance something could happen. We’re always checking our phones. It’s hard to focus.

“When I (first) went abroad for training, I couldn’t train. It was too hard. I had no strength to do that. I did it step by step. It took a long time. Now, I’m OK. I figured it out. It’s hard, but I have no choice or ability to change anything. I am more motivated now. I’m not doing this for myself. It’s about showing how brave our people are, how strong they are.”

No one might have a bigger distraction than Bryzhina. The area where they originally lived in Luhansk fell under occupation in 2014 when Russian-backed separatists took control of the area, so they moved to a Ukrainian part of the city, into a large house in the woods.

A week ago, the Ukrainian military withdrew and Russia announced it has established “full control” of the entire Luhansk region. Her parents have left, and a neighbor sent video the other day of Russian soldiers living in their house. Making food in their kitchen. Sleeping in their beds. Emptying the cupboards.

“I was choking and crying,” Bryzhina said. “It’s really difficult because you work your whole life and build your house for your family, and some strangers who you didn’t invite come to your house. I think these guys are really from the poorest parts of Russia. They took everything, like wild animals. They took ordinary things in the house, even plates and dishes. Thank God they haven’t destroyed it, but they have stolen everything — TV, microwave, everything.”

Because she speaks Russian, Bryzhina is acquainted with athletes from Russia and Belarus (that has supported the invasion). In the early days and weeks of the war, she texted them photos of the destruction in Ukraine and asked their reaction.

“They said, ‘Why do you send me that? Maybe you’re lying,’” Bryzhina said, noting that Russian news media has downplayed the extent of the conflict. “Then they started posting photos from the Russian national championship, and I was really surprised. You guys are competing when people from your country (invaded Ukraine) and forced me to sit in fear in bomb shelters. They answer that I am a liar and we believe in our government and we support them.”

“I don’t want to be friends with such disgusting people.”

The best hope for a Ukraine gold medal in Eugene rests on the narrow shoulders of Yaroslava Mahuchikh, a 20-year-old high jumper from Dnipro who was second at the 2019 World Championships and the bronze medalist at the Tokyo Olympics last summer.

Mahuchikh left her family behind and fled Dnipro in March, embarking on a three-day, 1,200-mile journey through Moldova and Romania to Belgrade, Serbia, for the World Indoor Championships — “hundreds of phone calls, many changes of directions, explosions, fires and air raid sirens.” She won there and is favored in Eugene, especially with reigning world and Olympic champion Mariya Lasitskene part of a World Athletics ban on Russian athletes.

Does she wish Lasitskene was competing?

“Honestly, no,” said Mahuchikh, whose personal best outdoors is 6 feet, 8¼ inches. “Russia is a terrorist state with its invasion of Ukraine. They must understand it’s not possible. If they compete, I won’t compete.”

She hasn’t been back to Ukraine since, spending the spring in Nuremberg, Germany. Then, Chula Vista. Then, Eugene. Then, she hopes, a return to Ukraine, where she is so popular she is regularly stopped on the street for pictures.

Serdiuchenko looked across the expanse of the 155-acre training center in Chula Vista, with views toward Mexico and Otay Mountain. It was quiet. No bombs whistling from the sky, no sirens wailing, no tanks rumbling.

“It’s a great experience to see the world and see the American people, but we do not want to stay here too long. We came here to do our job. We will do our job, and then we will go back home.”