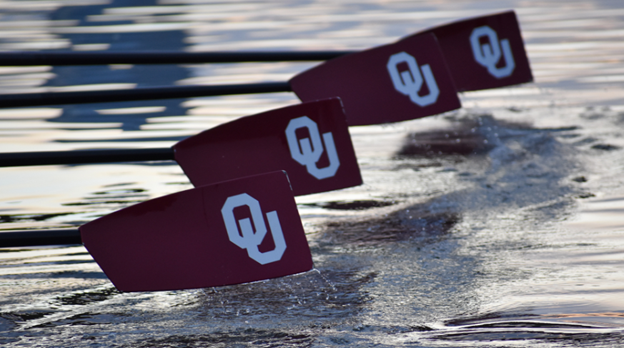 Chula Vista, CA – The University of Oklahoma Women’s Rowing Team (OU Rowing) held a winter training camp at the Chula Vista Elite Athlete Training Center (CVEATC) from January 5-15. A total of 52 athletes will be participating in OU Rowing’s winter training camp, accompanied by eight staff members. During their time here at the CVEATC, OU Rowing will have access to our boathouse and lake, strength & conditioning center, dining services (breakfast, lunch, and dinner), and staying overnight in our dormitories. This is the third training camp OU Rowing has done at the CVEATC, the last being two separate camps in 2020 (January & March), and we are thrilled to have them back.

Commonly referred to as the Sooners, OU Rowing was founded in 2008 and have quickly risen to the top of the sport. In just 13 years, the Sooners have won two Big 12 and two Conference USA titles and became the first Big 12 team to compete at the NCAA Rowing Championship in 2013 and did so again in 2014. OU Rowing’s program has also produced seven conference Rower of the Year honors, five Coach of the Year awards, numerous national awards, and unparalleled success in the classroom.

OU Rowing Head Coach Sarah Trowbridge will be overseeing the winter training camp. The 2022-23 Rowing season will be Trowbridge’s first season at the helm of OU rowing. Prior to Joining the Sooners in August of 2022, the 2012 Olympian got her collegiate head coaching start in San Diego, as the head coach of The University of San Diego women’s rowing program from 2017-19. During her time at USD, coach Trowbridge guided the Toreros to two top three finishes at the West Coast Conference Championships. Trowbridge also has international coaching experience, as she coached the U.S. women’s double sculls boat which took 6th place at the 2016 Rio Olympics.

As an athlete, Trowbridge was a member of six U.S senior national teams and was a member of Team USA at the 2012 Olympics in London, where her boat finished sixth in the women’s double sculls. Prior to her Olympic experience, Trowbridge won four consecutive silver medals in the quadruple sculls (2008-11). Trowbridge even competed at the 2007 Pan-American Games, as her boat took home the gold medal in the double-sculls event.

The Sooners recently concluded the fall rowing season, competing in their very own Head of the Oklahoma Regatta on the Oklahoma River in September, and the Head of the Black Warrior River hosted by the University of Alabama in October where they faced off against Alabama, Clemson, Louisville, and Miami. The NCAA rowing season is in the Spring, however, during the Fall programs focus on team building, and improving physical strength and endurance.

The CVEATC would like to wish The University of Oklahoma Women’s Rowing Team the best of luck as they continue their preparations for the 2023 NCAA Rowing season and hope to see them again for another training camp in the future.